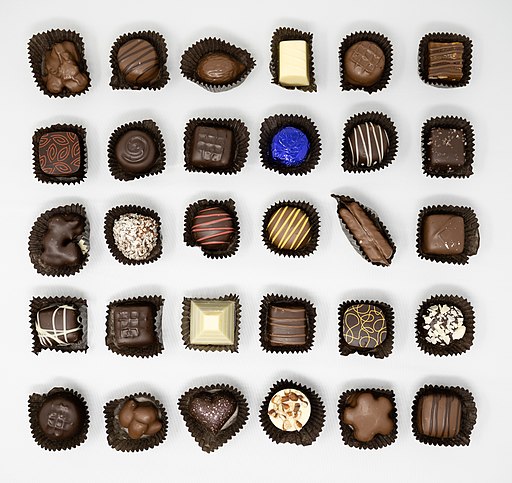 Chocolate: A Gourmet Gift From The Gods?

Milk, dark, white, filled with caramel or even infused with chilli, chocolate is relished the world over. But you may be surprised to learn that for many years it was consumed only as a drink! Indeed, cacao beans were first savoured in the form of a bitter liquid in Mesamerica (now known as central America and southern Mexico), having been harvested, ground and mixed with water, first by the Mayan and then by the Aztecs – whose chocolate adoration led them to consider it a gift from the gods!

From The Elite To The Masses

Chocolate reached Europe in the 16th century, and a crucial event in the history of this luxury treat came in 1828, with the invention of the ‘cocoa press’ in Amsterdam. This facilitated the removal of some of the fat from the cacao bean, making chocolate cheaper and easier to mass produce. It was at this point that it changed from being an exclusive delicacy of the European aristocracy to being widely available to all.

1847 heralded the invention of the solid chocolate bar – another key development in the chocolate timeline! After mixing the cacao bean fat and liquid and adding sugar, British chocolatiers J.S. Fry & Sons poured the resulting sweetened liquid chocolate into a mould to set, creating a dark bar. The creation of the milk variety followed shortly afterwards in Switzerland, through the addition of powdered milk to the mixture before it was set. Not content with fame as the inventor of the bar, J.S. Fry & Sons went on, in 1873, to develop the first chocolate Easter egg – taking the Christian tradition of decorated eggs at Easter time to a whole new level!

Cacao Then To Cocoa Now

Despite chocolate’s origins in the Americas, the vast majority of cocoa producers in the modern day are based in West Africa, with the Ivory Coast now being the largest cocoa producer in the world. The global chocolate market was worth almost $106.6 billion in 2020 and is set to grow steadily over the next few years. Not bad for the product of a little inauspicious-looking bean!

Opinion is, incidentally, divided about the exact origins of the word ‘chocolate’, although there is general agreement that it is likely to have been adapted and adopted from Aztec chocolate-related terminology. There is no such confusion about the transformation of the word ‘cacao’ to ‘cocoa’ though. This is widely believed to be the result of a spelling mistake by English traders – and the misspelt word stuck!

Chocolate today is manufactured, sold and enjoyed worldwide, and is intrinsically linked with key annual events and celebrations in the Western world, including most prominently Easter and Christmas. Now that I’ve whetted your appetite… chocolate Santa, anyone?

Want To Go Plastic Free? Here’s How.
Tourism Trends To Watch Out For Next Year