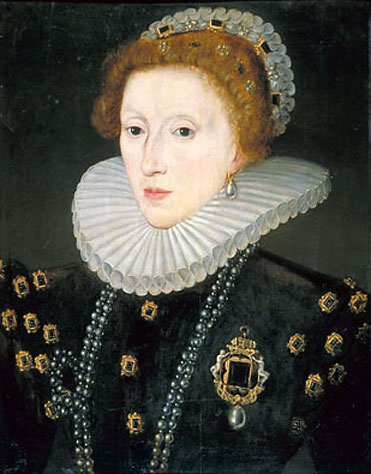 The Ascension of Elizabeth I

Queen Elizabeth I, the first child of King Henry VIII and his second wife, Anne Boleyn, ascended to the throne of England on November 17th 1558.

When Henry VIII died in 1547, he was was succeeded by his son Edward, but the young king died only six years later and Mary, the daughter of Henry’s first wife, Catherine of Aragon, came to the throne.

Mary’s rise to the position of Queen threw England into turmoil. As a fervent Catholic, Mary was determined to restore Catholicism to the country. Her marriage to the Catholic Prince Philip of Spain enforced her campaign, and soon the Protestants of England were being severely persecuted.

The country’s Protestants saw Elizabeth as their saviour, especially as it had been the marriage of her parents that had split England from the Catholic hold of the Pope in the first place. Mary increasingly saw her half sister as a threat to her rule and her religion, and in 1554 she had Elizabeth imprisoned in the Tower of London. Elizabeth only narrowly escaped being executed as Mary believed that she was pregnant with the heir to the throne. It was Mary’s hope that the birth of her child would secure her succession and unite her troubled monarchy, and spare her from having to order Elizabeth’s death. However, it soon became clear that Mary was not pregnant, and she was not able to have children; making it certain that on Mary’s death, Elizabeth would succeed her.

Elizabeth was moved from the Tower of London and kept under house arrest in the Manor of Hatfield until Mary’s death on Nov. 17, 1558.

Legend has it that when Elizabeth heard she was now Queen she quoted the 118th Psalm’s twenty-third line. ‘A Dominum factum est illud, et est mirabile in oculis notris’- ‘It is the Lord’s doing, and it is marvellous in our eyes.’ Two months later, on the 15th January 1559, at the age of 25, Elizabeth’s coronation took place at Westminster Abbey.

Elizabeth ruled for 44 years, four months and five days. Her reign has become known as England’s Golden Age, during which the Spanish Armada was defeated, English explorers discovered many parts of the ‘New World,’ and Protestantism returned to the country.

On her death, on March 24th, 1603, at Richmond Palace in Surrey, aged 69 years, Elizabeth, having never married or had children, was succeeded by her third cousin James of Scotland.

Revolutionary authors… of the Damned: Edgar Allen Poe
The Literature of Robin Hood