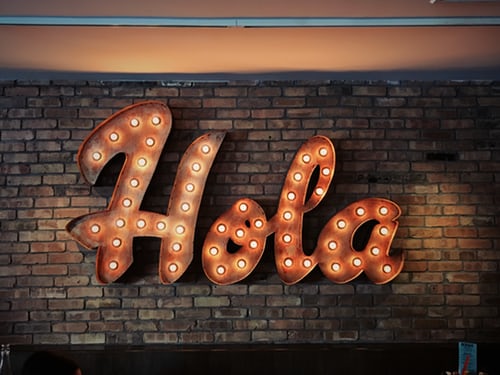 What if I told you there was a way to learn more than 2,000 useful, everyday Spanish words almost instantly?

We normally think of nouns as being an object, usually a common noun such as “boy, wall, table” or a proper noun, such as a person or place; for instance, “Peter, London, Spain.” However, there are a number of other types of nouns, for including; “the emotion”, “the sensation”, “the definition”. Note the ending: “tion”. The vast majority of these “tion” nouns will convert directly to Spanish by changing “tion” to “ción” so “emotion” becomes “emoción”, “sensation” changes to “sensación” and “definition”, in Spanish, is “definición”!

There are more than 2,000 of these words in the English and Spanish languages. Additionally, some of them are ones you’re likely to use a lot. Consider, “recepción” (¿Donde esta la reception?), “información” (¿Me puede dar información sobre …), “situation” (¿Cuál es la situación ahora?). There are a few exceptions (excepciones) to the rule, of course, and ironically, “translation” is one of them! The word in Spanish for “translation” is “tradución”, not “translación”!

Another aspect of these Spanish nouns which really benefit the learner is that each one is a feminine, “la” word. Examples would include, “La situación”, “La información”, and “La tradución”. They are very easy to remember, especially as these nouns end in neither an “a” (normally feminine) nor “o” (normally masculine) so you don’t have the normal rule of thumb to go by that comes with many Spanish words.

It’s important to get the accent right on these words. Every Spanish word has one and one only stressed syllable. For most, ending in an “n” this puts the stress on the penultimate syllable, unless there’s an acute accent (which looks like this: / ) above one of the letters. The accent shows where an emphasis should go when it’s different to what would normally be expected, and in these nouns it changes the stress from the second to last to the last syllable. So normally, the word “información” would sound like, “in-for-ma-THEE-on”, but with the accent it sounds like, “in-for-ma-thee-ON”. However, when these nouns are plural, they end in “es”. Nouns ending in “s”, like “n”, have the stress on the penultimate syllable, and with the additional syllable of the plural “es” the “stress on the second to last syllable” rule works, so no accent is needed. For example, translating the English sentence, “I have two translations to do” (in Spanish, “Tengo dos traducciones que hacer.”), the word “translation” becomes plural, so changes from “traduction” to “traducctiones”. “Trad-uc-thee-ON” becomes “trad-uc-thee-ON-es”.

When learning Spanish (or any language), it’s vital to have the confidence to speak, even if you aren’t fully fluent. With this top tip you have thousands of words that you can just have a crack at. Most of the time you will be absolutely right, too. Even if you’re not, the Spanish person you’re speaking to is likely to correct you and then you have the bonus of having learned another word, too!

The New Academic Year and its Opportunities
Learn to Earn: What are the Most Lucrative Degrees?