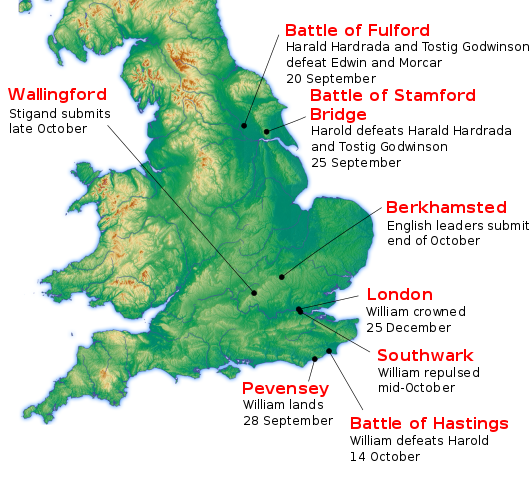 Why The Norman Conquest Still Matters

It is now 954 years since Duke William of Normandy’s successful invasion of England. You might wonder why we still learn about it in school and why it features on some GCSE History exams. If so, well, the truth is that the Norman Conquest still affects us today.

Impact on the English Language

Duke William didn’t speak any English and neither did his barons. In fact, William never bothered to learn English. As soon as he took power, French became the new English. It was the language spoken by anybody who held power. This change was so significant that about 10,000 French words are still in English usage today. Words for animals, like cow and sheep; words for jobs, like carpenter and butcher; and even words for clothes, including shoes and socks, are all of French origin.

With the Normans in power, anything associated with Normandy became suddenly popular, especially among Anglo-Saxons (English) who wanted to become part of the new social elite. As such, traditional Anglo-Saxon names, like Leofric and Aethelfled, quickly fell out of favour and were replaced with French names, like Robert and Mathilda. If you look at William’s name, you’ll see that it has never declined in popularity in Britain. More recently, it has been in the top 10 baby names for British boys for the last 50 years!

Impact on the Environment

With the arrival of the Normans also came the arrival of castles. While the Anglo-Saxons had various types of defensive buildings, they didn’t have anything like the motte and bailey castle that was so popular in Normandy. As soon as he landed in England, William began building these castles, first from wood and then, over time, replaced them with stone. While many of the castles built during William’s reign have not survived, he set the precedent for castle-building, with future kings all contributing to this change in our built environment. Although we don’t use them to defend the country anymore, they remain important to both our economy and our leisure. In 2015, for instance, there were over 61 million trips to castles across the UK.

Only this year, a study has shown that the Norman Conquest had a significant impact on the type of food that people ate and how that food was prepared, especially among wealthier families. For example, the study produced evidence of an increased consumption of pork products and chicken, and a move towards slow-cooking and roasting food. Comparing this to a modern British diet, it’s clear that little has changed. So, the Normans continue to exert a strong influence on us – even on our plates.

The Values Of Volunteering
Visualisation: A Powerful Tool for Academic Success

Kaye Jones is a teacher and freelance writer, with a passion for history and education. You can read more of her work here: http://www.theherstorian.co.uk/