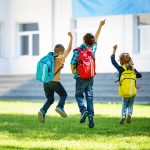 The best and worst places to raise children in your area

For many parents, the quality of schools is a major factor when deciding where to live. To help make the decision easier, we’ve ranked local authorities in England on a number of key factors, including the percentage of schools rated ‘Good’ or ‘Outstanding’ by Ofsted, the percentage of available school places and the affordability of […]

On the 1st December 1919, Lady Nancy Astor became the first woman to take a seat in the British Parliament. Originally from America, Nancy Witcher Langhorne Astor was born on 19th May 1879. After her second marriage, to Lord Waldorf Astor, she began a life of campaigning for better rights for women and children in […]

What is a Blood Moon?

A Blood Moon occurs when the Moon, during a total lunar eclipse, appears to take on a reddish colour. This ‘blood red’ appearance happens because the Moon is illuminated by sunlight that has been filtered and refracted by the Earth’s atmosphere. On the 27th July 2018, we will experience the longest total lunar eclipse of […]

In the Northern Hemisphere the longest day of the year falls on 21st June. This day is often referred to as the Summer Solstice or Midsummer’s Day. But why is this day so much longer than average? As the Earth rotates on its axis, parts of the world move closer to the sun, while the […]

What went wrong with Apollo 13?

Millicent Garrett Fawcett and the campaign for Women’s Suffrage

February 2018 brings with it the 100th anniversary of women over the age of 30 being granted the right to vote. As such, it was the first step towards all women being awarded equal status to men in political society. Without women like Millicent Garrett Fawcett, though, even the initial allowance might not have been […]

For some, one of the best bits of childhood is heading out on school trips to fun and exciting places. Whether home schooled or in the education system, a change of scenery and pace can often be a welcome treat. Seeing interesting or exciting places in the flesh is often more stimulating and memorable than […]

On the Importance of Literature to Learning

Let’s start by posing a fundamental question: how is one to learn about and marvel in experiences, cultures and ways of life in the past, if not through literature? In my view, there’s only one answer to that. You simply cannot know how you came to be where you are and who you are without […]

Cadw, the Welsh Government’s historic environment service, provides a home educated families scheme, giving you access to its incredible array of castles, houses and monuments. The only problem is deciding which to visit first. Caernarfon Castle, at the very north edge of Wales in the county of Gwynedd, is one of the most impressive Norman […]

Section B – Comparison of two Anthology poems The question in Section B will ask you to compare two poems from the fifteen which you have studied. The examination paper will choose one poem; you must choose the other. Preparation is key! It is absolutely vital that you are comfortable and familiar with all the […]