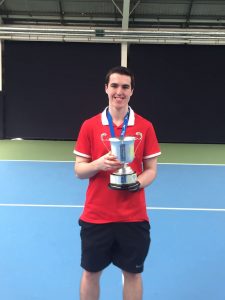 For young sportspeople training to become professionals, the intensive nature of training can make it very difficult to pursue an education within the mainstream school system. As such, home schooling can be a great way to achieve academic and sporting goals in tandem.

This was the case for tennis player Robert Leck, who began studying with OOL in 2010 when he began his KS3 studies. As is often the case with young sportspeople who decide to learn at home, Robert spread out his KS3, IGCSE and A Level studies over the course of a number of years, making sure he had enough time to pursue his athletic passion.

“Studying with OOL allowed me to balance playing tennis and schoolwork,” Robert explains. “The main benefit of distance learning was the freedom to work at my own pace depending on my other commitments.”

“My tutors were useful in helping me achieve good grades for both my IGCSEs and A levels,” says Robert, who has since gone on to study Economics and Finance at the University of Stirling. “Distance learning has more in common with university study than it has with school, so it set me up well for the future.”