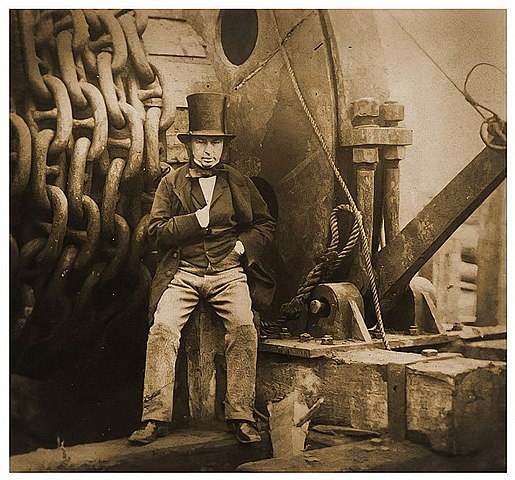 Named after his parents, Isambard Kingdom Brunel was born on April 9 in Portsmouth. His English mother was Sophia Kingdom and his French Father, esteemed Engineer and Inventor Sir Marc Isambard Brunel. With many of his constructions remaining in full use to this day, he is rightly regarded as one of Britain’s most creative engineers.

Educated in France and England, as a young man Brunel worked as an engineer on the Thames Tunnel, under the direction of his father. An injury put him out of action for a while but during his period of recuperation he set about designing and then working on his first solo project: the Clifton Suspension Bridge, to traverse the River Avon in Bristol. He was twenty four years old when he made this debut. The bridge was constructed between 1830 and 1863, remains fully operational today and is an iconic landmark.

Brunel And The Railways

At Bristol Docks, he made great engineering improvements. Indeed, he went on to engineer various other dockyards across the country, before he was appointed as Chief Engineer to the Great Western Railway in 1831. He designed and implemented broad gauge railways so trains could travel at much faster rates, which enabled a leap in social progress as people, goods and communications could travel much more easily about the country.

It wasn’t all full steam ahead though. In 1844, Brunel implemented a system of pneumatic propulsion on the Devon railway which didn’t work – though this didn’t deter him! He built around a thousand miles of railway track across South Wales, the Midlands, the West Country and Ireland, built two Italian railway lines and advised on Australian and Indian railways. He worked on railway bridges and tunnels across the country including the Maidenhead Railway Bridge, whereby he used an innovative method of compressing air to sink its foundations.

As if all that wasn’t enough, Brunel built large guns, a prefabricated hospital and a huge floating barge. Other celebrated achievements include three paddle steamers, each the largest in the world during their time: Great Western (1837), Great Britain (1843) and Great Eastern (1858).

Brunel married, had a family and was a man of big ambitions. On a personal level, at around five feet tall, he admitted he sometimes felt his height meant people wouldn’t take him seriously. So when out riding his pony, he made sure to sit bolt upright and wore an unusually tall hat!

A Legacy Of Progress

As an original thinker, Brunel took a passionate, hands-on approach to his projects which helped motivate his workers, though he often wished he could be more organised in the way he worked. However, his mathematics and measurements were always spot on and it’s this meticulous care that helped progress his rapidly industrialising nation, and which ensured his projects passed the test of time. His personal motto was certainly one he lived by: ‘En Avant’, meaning ‘Forward’.

Deborah Caine also writes personalised poems. If you would like to know more, you can find her here.

Early Bird Or Night Owl?
The Rags To Riches Tale Of Charlie Chaplin