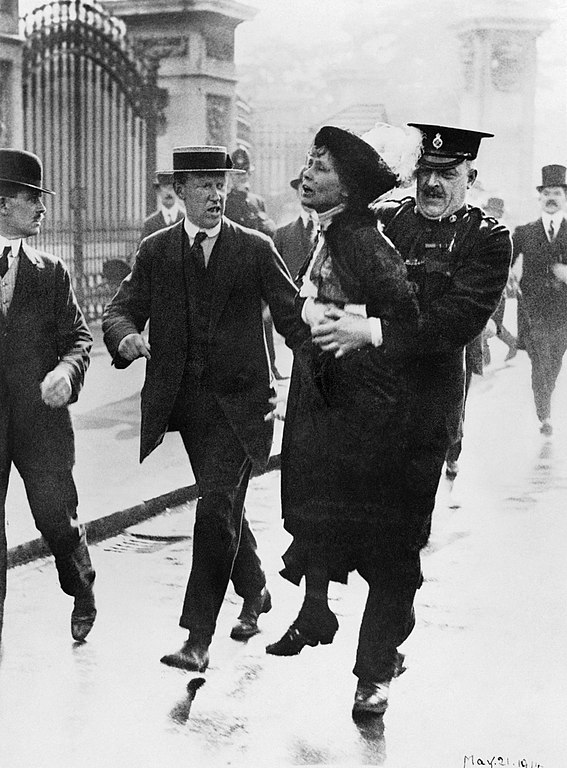 Emmeline Pankhurst and The Suffragettes

‘Trust in God – she will provide’ – Emmeline Pankhurst

It would appear that July is a month of great British birthdays. Last week, we saw what would have been the 228th birthday of Percy Bysshe Shelley, one of the greatest lyric and philosophical poets of the English language, while today (14th July) marks the birthday of the leader of the female suffrage movement; Emmeline Pankhurst.

Born in the Moss Side district of Manchester to politically active parents, Pankhurst was introduced to the women’s suffrage movement at the age of 14, when she accompanied her mother at a female voting rights public meeting. She later began her foray into activism with the Women’s Franchise League, which advocated suffrage for both married and unmarried women. When the League disbanded, Pankhurst tried to join the Independent Labour Party but was refused membership on account of her gender.

In 1903, Emmeline and her two daughters, Sylvia and Christabel, founded the Women’s Social and Political Union (WSPU), a group whose ambition was to gain equal voting rights for women. A term coined by the Daily Mail, the group became known as the Suffragettes and worked on the principal of ‘deeds, not words’.

While estimates on membership numbers vary widely from 2,000 to 5,000, events such as the Women’s Sunday Procession in June 1908 demonstrate wider support for the movement, with over 300,000 protesters.

Their methods included political campaigning and intervention at government meetings, but also involved a powerful, militant form of activism for which they became well-known. Members typically smashed windows, damaged property, and staged hunger strikes as part of radical action that ensured that their voices were heard. Emmeline Pankhurst herself was jailed three times in 1908 alone. The picture above shows her arrest trying to petition the King in 1914.

A phase of extreme militancy, mainly in the form of arson, was directed by Christabel from Paris from 1912, and in 1913 Emily Davison infamously threw herself under the King’s horse at the Epsom Derby to promote the cause. This caused more moderate organisations to speak out against the WSPU, yet the onset of World War One saw an end to radical action.

In 1914, the Pankhursts encouraged WSPU members to pause demonstrations and focus on the war effort. In response, the government released all WSPU prisoners and in 1918 the Representation of the People Act was introduced, which gave women who owned property over the age of 30 the right to vote.

Unfortunately, Pankhurst died on 14 June 1928, just weeks before the Conservative government passed the Representation of the People (Equal Franchise) Act, that gave all women over the age of 21 the right to vote.

While historians debate the effectiveness of her approach, it is undeniable Emmeline Pankhurst was hugely influential in changing the course of history. A feminist icon, she was named one of the 100 Most Important People of the 20th Century by TIME magazine in 1999.

On 6th February 2018, the UK commemorated the 100th anniversary of the Equal Franchise Act. However, whilst gender equality has made huge advancements over the last century, inequality manifests itself in society in different ways today. For example, as of 2019, less than a third of government MPs were women and in 2018 only five FTSE 250 companies had female CEOs. It therefore seems that Pankhurst’s principal of ‘deeds not words’ is still needed today, as the fight for gender equality is far from won.

What is Metacognition and How Can It Help Me Become a Better Learner?
Look Forward to Stand Out From the Crowd