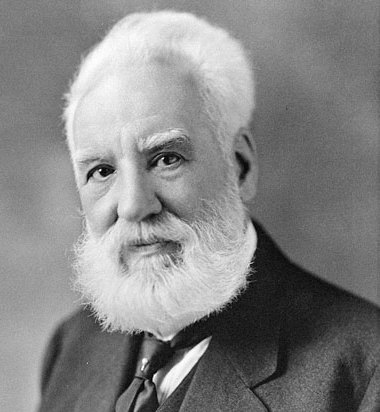 In our modern age of sophisticated smartphones, it is almost impossible to envisage life without the telephone. Can you imagine not being able to pick up your phone to call your brother or sister for a catch up, or give your friend a quick ring to let them know that you are running late to meet them? Telephones are unquestionably a fundamental part of our world today. But who do we have to thank for the invention of this technology that is now such an integral part of our daily life?

Alexander Graham Bell is heralded as the inventor of the telephone. Born on 3rd March 1847, he grew up in Scotland, but moved to Canada and then on to America as a young man. Inspired by his father and grandfather, who were both experts in elocution, Bell conducted extensive research into speech and sound from the age of 16. Spurred on by his work teaching deaf children, in 1872 he founded a centre for training teachers of the deaf, with it becoming part of Boston University. Bell was awarded a professorship of Vocal Physiology and Elocution at Boston University the same year.

Bell’s fascination with sound, crucially, also led to his pioneering experimentation with the transmission of speech. This in turn inspired him to create a basic receiver that could convert electricity into sound, culminating in his successful invention and patent of the telephone in 1876. Bell made the first ever spoken telephone call on 10th March that year. Less than a year later, the first telephone exchange was set up in Connecticut, and the Bell Telephone Company was created in 1877 to commercialise the innovation. This made the opportunity to communicate over long distances available to the public, and generated significant wealth for Bell (Today’s hugely
successful multinational corporation AT&T is actually the direct descendant of the Bell Telephone Company!).

Despite the prominence and success of his key invention, Bell did not stop researching or innovating. In recognition of the fundamental importance of his work in developing the telephone, Bell was awarded the French Volta Prize in 1880, and he used his prize money to found the Volta Laboratory in Washington. This served as a base for further experimentation with sound and communication, and for the development of more complex and sophisticated systems for teaching and communicating with the deaf.