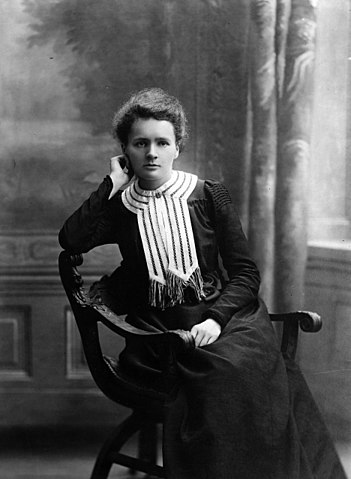 Marie Curie has an extraordinary scientific legacy, which belies a very humble start in life. She was born Maria Sklodowska in Poland in 1867, the youngest daughter in a poor family of five children. Driven by a thirst for learning and education, Marie’s hard work at school was, however, rewarded with the offer of studying Physics and Maths at the prestigious Sorbonne University in Paris. This was where she met scientist Pierre Curie. Marie and Pierre studied radioactivity together and made the vital discovery of two new chemical elements – polonium and radium.

Following the death of her then-husband Pierre in an accident in 1906, Marie continued the pioneering work that she had begun with Pierre. She also took over his teaching position at the Sorbonne, becoming the first woman ever to teach at the university. The work done by Marie on radioactivity changed medicine forever: radium is used to treat cancer, and the effects of Marie’s scientific discoveries are therefore still felt today. Sadly – particularly given her important role in the development of treatment for illness – Marie suffered from ill-health for much of her adult life. She did not realise it, but her work with radioactive materials was causing her to suffer from radiation sickness. Marie Curie died in 1934 from leukemia, as a result of exposure to radiation during her career (Amazingly, the notebooks containing her scientific workings are to this day too dangerous to touch without protective clothing, due to their radioactivity.

The scientific work of Marie Curie also had huge impacts on the medical world in other ways: her study of x-rays led to her important role in World War One, helping to fit small x-ray machines to ambulances. Marie was put in charge of the Red Cross’ radiological service and, as well as tending to injured soldiers herself, Marie also taught doctors how to use mobile x-ray machines to diagnose injuries and locate bullets and shrapnel in wounded soldiers’ bodies.

Marie Curie won the Nobel Prize twice – once in 1903 and again in 1911. She received many scientific prizes and honorary degrees from universities across the world, in recognition of the importance of her scientific discoveries and of the vital role she played in advancing understanding of x-rays and
radioactivity.