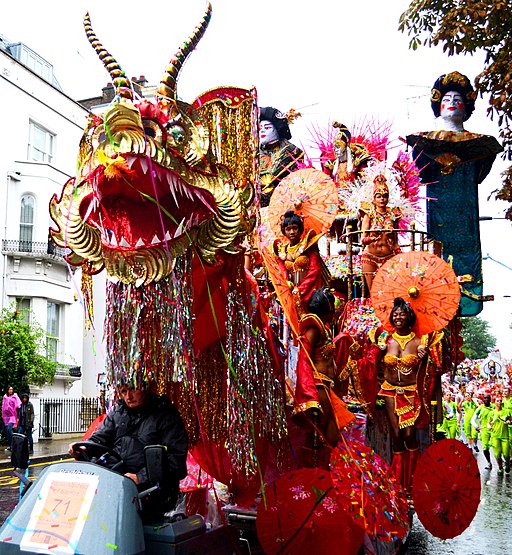 The Origins of Carnival Culture

This August bank holiday would traditionally have seen Notting Hill explode with life, as the annual Carnival event swept the streets in a flurry of vibrant colours and infectious energy. In light of this I decided to look into the history of carnival culture and its origins.

Carnival originated in the Caribbean as a blend of the music, dance, and festival traditions of the wide variety of Africans brought to the West Indian islands by the slave trade. African culture then combined with European influences in a process named creolisation, which resulted in a huge number of varying carnival traditions that featured a cultural blend of dance and music. Performances were filled with social commentary and took great influence from contemporary themes such as conflict, culture, politics, economics, religion and ancestral worship.

Jamaican Junkanoo is a major form of Caribbean carnival with a longstanding history. It is said that Junkanoo was a reference to John Conny, a chief on the Gold Coast who defended Fort Brandenbrugh against the Dutch in the early 18th century. Men would dress with ox horns and boar tusks to represent the fierceness of the chief. Junkanoo later saw the influence of British kings and warriors but he always remained a masked figure with exaggerated facial features and strange clothing. It is argued that this represented the inversion of social norms and the revolutionary potential of carnival in physical form.

Conflict was also embodied in carnival music. The main instrument used were African drums, which were feared by Europeans for their unfamiliarity and potency in signalling revolt during revolutions. Drumming was hence strictly prohibited and highly politicised. It is also argued that bashing and beating drums was a sonic representation of the brutality of slavery, meaning the music by which carnival was accompanied was heavily characterised by conflict.

Dance and carnival traditions were also influenced by the West Indian economy, as many carnivals were held based around the plantation calendar. For example, due to the early consolidation of sugar production in Barbados, the main Bajan dance festival became the enthusiastic celebration of the ending of the sugar crop in summer. Meanwhile in Jamaica, the Christmas period became significant for carnival culture as this was the year end, during which time the crops needed least attention.

The musical element of carnivals was also heavily influenced by the slave economy, with the call and response rhythms of work songs continuing from plantations into carnival singing traditions. The loud music and wild movements were also said to be demonstrations of autonomy and a rejection of slaves’ classification of property; loud music and wild movements showed that slaves were very much energetically alive, in resistance to the subhuman state in which they were kept.

Cultural events were also often mimicked in Caribbean carnival. Satirical commentary drew heavily upon politics, with leaders represented as clumsy and tyrannical. Plantation wives were also portrayed in a grotesque light, with affairs and occasions represented through dance and costume mimicry.

For example, European elites attempted to represent carnival as indecent and vulgar in the Port of Spain in 1838, resulting in controls on carnival procedures. However, the authorities’ attempts to abolish and control carnival throughout the century only ever resulted in riots. The immediate satirisation of these riots in carnival illustrates the highly current and topical nature of its influence.

Another key feature underpinning carnival traditions was religion. Slaves were permitted to celebrate carnivals such as Junkanoo at Christmas as this marked the celebration of Jesus’ birth and slavers would allow their slaves time off work to celebrate. Certain carnival traditions were also performed during the Catholic fast of Lent, meaning these types were only found exclusively in colonies practicing Roman Catholicism.

Religion was also a great influence on the characters that were celebrated through carnival traditions. In the Jamaican Junkanoo, it is believed that the word originated from ‘dzonc’, meaning magician or sorcerer, and ‘kunu’, meaning terrible or deadly. Therefore, historians have also theorised that the figure, here named John Canoe, was originally a witch doctor or spiritual leader.

Particular dance styles also saw strong religious characterisations. Kromanti dance of the Jamaican maroons was also based on religion, as it featured a ceremony in which dancers were ‘possessed’ by spiritual ancestors in order to resolve issues in the community. Ancestors were also called upon during the ceremony to protect against evil spirits, thus showing the highly spiritual nature of this form of carnival.

Carnival culture has come a long way since it first originated and has seen many further adaptations in the various countries in which it is practiced. For more information on the Notting Hill Carnival and the particular influences which have formed this specific culture, head to the NHC 2020 website to find out more.