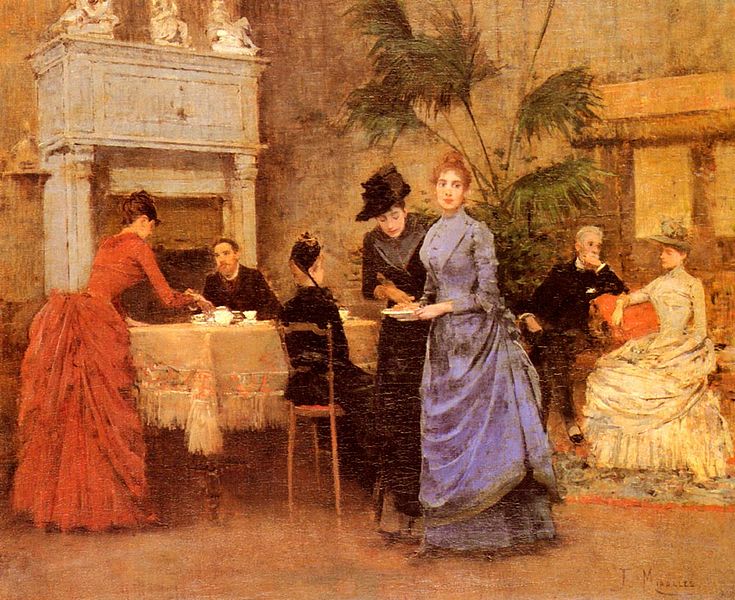 It’s hard to imagine a more quintessentially English experience than sitting down mid-afternoon to indulge in a plate of delicious sandwiches, scones and cakes, accompanied by a refreshing pot of tea.

The ritual of taking daily afternoon tea began in the 1840s amongst the British aristocracy, who introduced it as a small meal to stave off hunger before supper, which was at the time typically served around 8pm. The practice of pausing one’s activities for it soon caught on, and became a fashionable social event for refined ladies to enjoy with distinguished friends. It became so popular, in fact, that as the example above shows, it inspired a number of artists to depiction.

Afternoon tea typically consists of three specific mini courses: a selection of finger sandwiches (often with their crusts cut off; cucumber sandwiches are an iconic staple here), followed by a round of homemade scones – with or without raisins – served with jam and clotted cream. The final course comprises a variety of mouthwatering sweet pastries and delicate cakes. The actual tea that accompanies the meal can be of any variety – Assam, Darjeeling, Earl Grey, or the highly traditional English breakfast tea, for example.

While sadly no longer a routine part of our daily lives, the custom of taking afternoon tea endures to this day. City hotels and restaurants offer the chance to rest and unwind with one during a weekend shopping trip. Alternatively, for a special occasion, with family and friends, one can also sometimes be found in a luxurious country house hotel. So keep an eye out!

In addition to the more traditional examples famously served at the world-renowned hotels such as The Ritz London, themed teas are a recent and popular innovation. In central London alone, options with a twist are many and varied, including the literary-themed Peter Pan afternoon tea at The Shard and the Charlie and the Chocolate Factory afternoon tea at One Aldwych, or even the intriguing-sounding Science afternoon tea at The Ampersand Hotel, which promises all manner of Science-themed delicacies! A feast for the eyes and
for the mind as well as for the taste buds, no doubt…