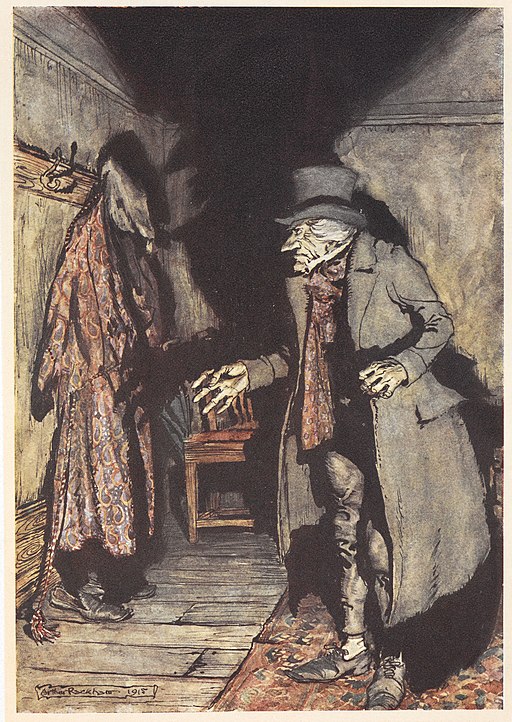 A Christmas Carol has become a story so deeply entrenched within our culture that it is hard to extract the narrative from any other of the traditions of the season. Whether singing along to the recently reinstated ‘When Love is Gone’ in the Muppets version, to watching your favourite TV show put their own twist on the tale (with all sorts of shows, from Saved by the Bell to The Flintstones having offered up their own adaptations), the story of Scrooge and his ghostly visits from the different incarnations of Christmas has become one much loved by adults and children alike. And whilst the messages of redemption and kindness at this special time of year have not become lost through these many different remasterings, Dickens’ original commentary on the injustices of a society becoming all consumed with the trappings of capitalism might require a little more unpicking from such Christmassy pop-culture favourites.

How Dickens’ Early Experiences Shaped The Message Of A Christmas Carol

Born on February 7th 1812, Dickens was the second eldest of a family of eight children, meaning that, as he became old enough to join the men at work in the factories (aged 12), he played an important role in supporting the family, particularly when his father was taken to a debtor’s prison as a result of financial difficulties. During this period of time, his family moved throughout some of the poorest parts of London, with Charles himself also, at times, living alone. Although his father was released from jail after receiving an inheritance and Charles was able to attend school for a short while, it was not long before he was forced to work again becoming first an office boy and then a reporter in the courts of London.

What these early experiences gave Charles was an insight into the variety of lives that inhabited London at this time with his sketches of London life (often signed ‘Boz’) often accompanying his writing and leading to his first book, Sketches by Boz in 1836. During this period of his life he had become more than just an eyewitness to the impact of extreme poverty and witnessed how this contrasted with the fashionable London life that was portrayed elsewhere.

The Social Problems Of Victorian Britain

With Queen Victoria coming to the throne in 1837, the British Empire expanded. The impact of the Industrial Revolution had seen the nation become a global power producing much of the world’s iron, coal and textiles. Whilst the Great Exhibition of 1851 became a showcase of this power and wealth to the rest of the world, A Christmas Carol, first published in 1843, highlighted the major impact of poverty experienced by many of those living within the capital (and the other cities growing around these newly industrialised locations). Dickens had experienced first hand the overcrowding, poor working conditions and crime that accompanied this societal growth. He witnessed the introduction of The Poor Law in 1834 that was society’s attempt to address this issue – and saw that, in reality, it was this endeavor to address poverty, that saw financial aid available for those who were prepared to go to the workhouses, actually just a way to further punish and monetise the labour of those in need. Dickens, very much still the journalist, intended to expose these issues within his popular fiction.

Whilst Dickens is famed for the way his writing became popular through their serialisation, he also made the decision to combine his festive tale with the popular form of a ghost story, making these social commentaries easily accessible to all his readers. Whilst the structure of the novella – five ‘staves’, one for each visitation (including Marley) and a final ‘happy’ resolution – is one that is relatively simple, the imagery, symbolism and characterisation plays a more important role in the way he delivers his important message. Tiny Tim and The Cratchit Family provide us with an insight into the lives of those experiencing poverty with Scrooge himself clearly representing the arrogance of those unwilling to see those in need as deserving in any way. Other characters such as Fred (his nephew) and Fezziwig (Scrooge’s first employer) show us how we might use and embrace the spirit of the season as an opportunity to give to those more in need. However, it is the moments that are less familiar to the audiences of the popularised reimaginings that leave the greatest impact when it comes to his message on social injustice.

It is as Scrooge watches on as the charwoman rummages through his stolen belongings with no degree of sympathy for the death of ‘Old Scratch’ that we see the true desperation of the poor, without any of the cheer and optimism that Tiny Tim brings. And it is the shadowy and disturbing figures of Ignorance and Want that appear from under the robes of The Ghost of Christmas Present that might be understood to represent the true message of the tale: that you don’t need to look too far beyond the seasonal sparkle to find the greed and selfishness still all too present within modern society.