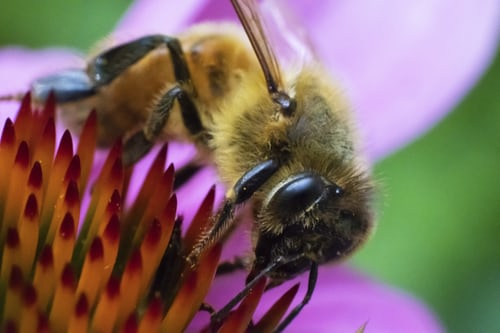 Bees, Climate and Us

It can’t have escaped your attention that there is great concern over the decline of the honey bee. And so there should be. Bees, honey or otherwise, are a vital part of our ecosystem, and have been for thousands of years. Without bees, there would be a worldwide shortage of fruit, especially apples, cherries, plums and pears. This means that, after cattle and pigs, the bee is the world’s third most economically important domestic animal.

As with all species, honey bee population numbers can fluctuate from year to year depending on weather and local conditions. The I-newspaper recently reported that, ‘Accelerating globalisation in recent times has resulted in people and bees coming even closer together. For bees, this means that without the help of humans there are many areas in the world where they could not survive.’

As people take over more of the planet, bees have less natural habitats to occupy, and over the past 100 years in particular, they have become reliant on beekeepers providing hives. This means that the problem with a potential fall in honey bee numbers comes, not necessarily from the bee colony’s themselves, but with a decline in the number of beekeepers looking after regulated hives.

The British Beekeepers Association recently announced a significant drop in the average hive’s yearly yield of bees. In fact, numbers have been falling within British hives for decades. A similar situation has also arisen in Germany. There, research has begun into the problem. So far this study has shown that thirty percent of German bee colonies have disappeared over the past 30 years. But does this mean that bees are dying in larger numbers now due to infection, or that there are less beekeepers than before?
In 1956, beekeeping in Germany was a profitable sideline in many larger households. However, by 1976, there was no profit in beekeeping, and many people gave it up. When, in 1980, an infestation of Varroa mites attacked and killed hives across the country, the numbers of beekeepers dropped further.

Over the last forty years there has been in shift in how many beekeepers operate, with an increase, rather than a decrease, in the number of mass hive colonies, or honey factories across Europe as a whole. There has also been a large rise in the number of people taking up beekeeping as a hobby, with some keeping one or two hives in their gardens or allotments. So despite concerns for the honey bee, in the UK and Germany the number of beekeepers is increasing at about 3 to 5 per cent per year, and the number of colonies within them are also growing- although not yet at a fast enough rate to make up for the previous decline in actual bee numbers.

It isn’t just the fall in beekeepers that can affect a bee’s health. The weather and seasons play a part in the fluctuation of bee numbers. In the northern hemisphere, winter can be a time of heavy losses for beekeepers, especially if the colony is already weakened before the winter period due to a spread of disease (often through Varroa mites) or through a lack of food. Long periods of poor weather, when the temperature is either too hot or too cold, affect the growth of flowers and trees and therefore the bees’ food supply.

The Bayer research institute states, ‘…although Varroa mite infestations can result in the loss of entire colonies… beekeepers accept that there will be some losses of colonies each year. In Europe this is about 15 percent, and in the U.S. 20.6 percent. However, beekeepers can build up their hive numbers following these instances by splitting colonies into two groups in the springtime. Throughout the summer, the number of bees in each colony increases again to make a strong, healthy colony with a queen laying eggs (up to 2,000 per day!) in the height of the season…’

When active within a healthy hive, a worker bee should live for an average of six weeks during the summer, so thousands of bees die each year from nothing more sinister than natural causes.

Although the honey bee population has had to deal with a dip in hives being cared for, and the resulting attacks of the Varroa mite (which are kept at bay by beekeepers) – as well as changes in the environment and climate, in fact honey bee colonies worldwide have, according to Bayer research, ‘increased by more than 65 percent from the 1960s to the 2010s.’ This trend, with occasional blips, is set to continue.

As a race, humans would not starve without bees. We could survive by eating cereals and other plants that do not need insects to pollinate them. However, we do need vitamin C, and most of the vitamin C in our diet is obtained from plants pollinated by insects. It is no wonder that the Germany community in particular has been so concerned about the welfare of its honey bees, when 80 percent of its indigenous fruit trees being dependent on honey bees.

A lack of honey would be sad indeed, but the bee is so much more than a provider of honey or beeswax. It is an extremely important part of our overall ecosystem, which is, itself, under threat. There is no way to tell how the increasingly hot summers and cold winters will affect the bee population in the long term. For now, if we want to keep our honey bees then we need more hives and beekeepers to protect them.