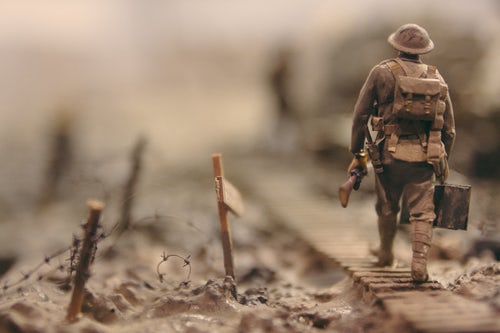 How did World War One Impact Medicine?

War is the only proper school for a surgeon.
– Hippocrates

The First World War was a watershed moment in history. Never before had such a relatively short period in time seen such seismic shifts in technology, society and culture. The newly industrialised nature of the conflict and parallel stalemate of the trenches, all under near-constant artillery bombardment, was fertile ground for rapid innovation. In just four years the battlefields of France and beyond saw the introduction of tanks, militarised aircraft, machine guns and chemical warfare. But what war harms, society inevitably must find ways to heal. These novel technologies of death and destruction brought with them wounds and bodily disorders completely new to medicine, and as a result the medical field would embark on a journey of similarly hasty scientific advancement.

The nature of trench warfare meant that, with soldiers’ bodies protected most of the time, there were a disproportionate amount of head and facial injuries. Surgeons were at a loss as to how best to treat these horrific wounds and burns, often stitching together open wounds with no time to consider the consequences of the healing process.

At Sidcup in London, a New Zealand-born, British-trained surgeon, Harold Gillies, was a crucial figure in the development of reconstructive surgery. Gillies advocated a highly experimental, never-before-seen method of treating facial gunshot and burn victims with skin grafts – taking tissue from, for example, the chest or leg and using it to repair the face – a technique still in mainstream use today. In a pre-antibiotic age, his pioneering “Pedicle Tube,” a tube of skin leading from the donor site to the graft site, allowed blood flow from a healthy area of the body to the injured area, nourishing the graft tissue, and preventing infection.

Other advancements in the treatment of physical injury included the Thomas splint, developed by Welsh surgeons Hugh Owen Thomas and Robert Jones, which drastically reduced the number of deaths from broken bones, and the mobile X-ray unit, invented by Marie Curie in France and launched onto the battlefields with the help of 150 female operators.

It wasn’t just physical injury that soldiers risked on the frontlines. Disease, including the 1918 flu pandemic, accounted for around one third of military casualties, while around six million civilians perished due to disease and war-related famine. After seeing the widespread death caused by Typhoid fever during the Second Boer War, a British bacteriologist called Almroth Wright lobbied the British Army to provide 10 million vaccines against the disease to its troops on the Western Front, preventing, by some estimates, around half a million deaths.

Infection originating from wounds was also rife, thanks in part to the foul conditions in the trenches, where lice and mud were ubiquitous. An antiseptic solution developed by the French-British partnership of Alexis Carrel and Henry Dakin drastically reduced the need for amputation due to sepsis.

The Advancement of Medicine in World War I

From the ashes of war progress so often springs, the decay and destruction of conflict powering innovation and change. The First World War was billed as the war to end all wars, a title that as we well know could not have proved further from the truth, but soldiers and doctors of subsequent conflicts benefited immeasurably from the new medical knowledge, technologies and techniques that emerged from it.

Can you spot the American spellings that are baffling UK adults?
Periodic Table 150