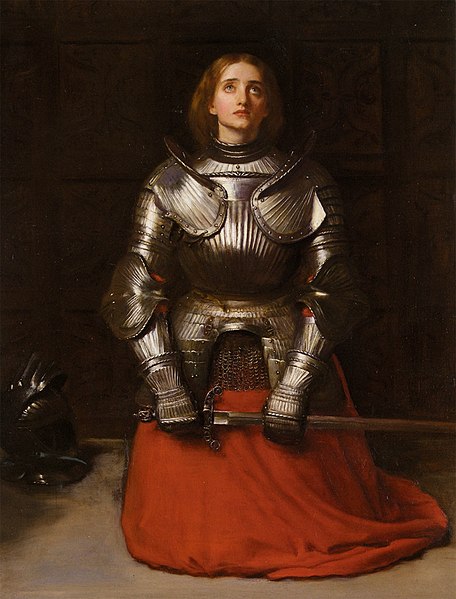 Joan of Arc is believed to have been born on the 6th January 1412. To mark her birthday, here we take a brief look at who she was and why she has become a household name.

Joan of Arc was born in Domrémy, northern France, during the Hundred Years’ War. The daughter of a tenant farmer, Joan led a humble life. She learnt domestic skills from her mother, becoming a skilled seamstress, and looked after the animals on the farm.

The Hundred Years’ War, which started c.1337, began due to disputes over who was heir to the French throne – the English Plantagenets or the French royal house of Valois. In 1415, King Henry V of England invaded France and was successful in gaining the support of the Burgundians. A treaty was established which granted Henry regency for the insane French king Charles VI and ensured he would inherit the throne after Charles’ death. However, in 1422, both Henry and Charles died within a couple of months of each other, leaving Henry’s son king of both England and France. But supporters of Charles VI and his son (also named Charles) saw this as an opportunity to return the crown to a French monarch.

The Visions Of Joan Of Arc

Around this time, Joan began to have visions in which she claimed to have communicated directly with saints, and that these saints had designated her the saviour of France. In May 1428, Joan’s visions encouraged her to seek an audience with the young Charles (who had by now named himself Dauphin) and ask his permission to help him defeat the English. Joan was instructed to contact commander Robert de Baudricourt at Vaucouleurs. Though he initially refused Joan’s request to meet with Charles, Baudricourt ultimately relented and in 1429 Joan set off on an 11-day journey across enemy territory, with a horse, an escort of several soldiers and dressed as a man, to meet Charles at Chinon. Unsure of what to make of this peasant girl who professed that she could save France, Charles subjected Joan to a great deal of interrogation, by both himself and prominent clergymen and members of his court. Eventually, Charles elected to provide Joan with armour and a horse and allowed her to accompany an army to Orléans, the site of an English siege, and in a series of battles in May 1429, the French took control of the English fortifications. Charles was later crowned King Charles VII with Joan occupying a prominent place amongst the courtiers during the ceremony.

In 1430, Charles ordered Joan to confront the Burgundians at Compiegne. During the battle, Joan fell from her horse, was captured, and held hostage. The Burgundians sold her to the English, who saw her as a valuable propaganda tool, and Joan was given to the church who insisted on trying her as a heretic. She was charged with several counts including witchcraft, heresy, and dressing as a man and, after a trial in early 1431, was found guilty of heresy and sentenced to being burnt at the stake. She was only 19 years old.

After Joan’s death, the war continued but Charles VII retained his crown. In 1456, after an investigation into Joan’s trial, it was declared that Joan of Arc was innocent of all charges and was designated a martyr. On May 16th, 1920, she was canonised as a saint. She remains a French national hero and a symbol of hope and perseverance to all.

Happy Hogmanay!
Talking Tolkien: Why The New Amazon Series Is On Shaky Ground