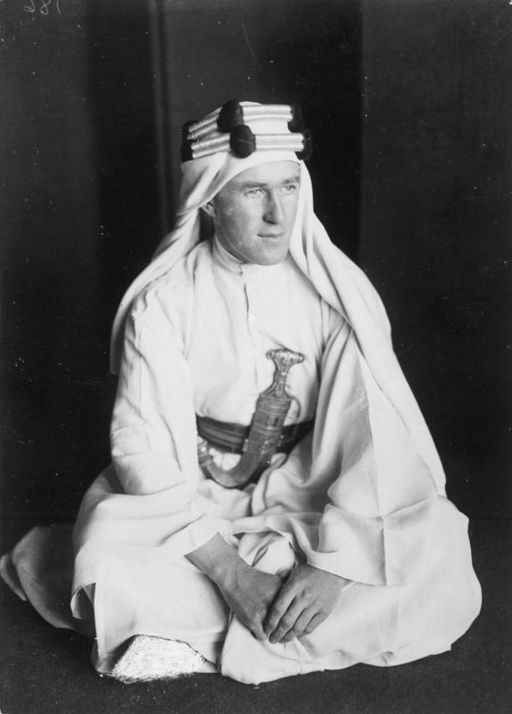 Thomas Edward Lawrence was born on 16th August, 1888, in Tremadoc, Caernarvonshire. He studied at Oxford University before becoming an archaeologist with a passion for the Medieval Military and Arabic Studies. His life and work would earn him the nickname Lawrence of Arabia. It was one he never particularly liked, however. This may have been because it was part of a fame he did not want. He also preferred to use the initials T.E. rather than his given names, even before he became well known.

In 1909 Lawrence made his first visit to Syria and Palestine. Whilst there he developed a great respect and understanding of the Arabic population. This would lead to life as a diplomat, soldier and writer. In each of these roles, he campaigned against the (Turkish) Ottoman Empire that ruled the region.

In 1911, he joined an archaeological dig in Syria. It was an excavation of the Hittite settlement of Carchemish on the Euphrates river. His interest meant he stayed here until the Great War broke out in 1914. While he was there, he learnt to speak Arabic. It was during this time that he developed a sympathetic attitude to those who’d been subject to the oppressive nature of the Turkish rule.

War saw T.E. Lawrence became an intelligence officer. Early in 1914 he, together with colleagues Woolley and Newcombe, undertook an undercover mission mapping land from Gaza to Aqaba. The work was strategically crucial and supported by the Palestine Exploration Fund. Conducted under the guise of scholarly study and it actually became a genuine piece of literature.  Written by both Lawrence and Woolley, its title is The Wilderness of Zin. This was published in 1915.

By the time war began in November 1914, Lawrence was noted as an expert in Arabic understanding. He was employed by the Map Department of the War Office in London and tasked with putting together an accurate map of the Sinai region. The following month he was sent to Cairo. Here he worked to gain intelligence against the Ottoman Empire. He proved a success in this position as well. Lawrence produced a vital guidebook of information about the Turks and the Arabs and Allies used it against them.

The Arab Revolt began in June 1916. Lawrence was appointed the British liaison officer to the revolt’s leader, Sherif Hussein of Mecca. Using his skills as a diplomat and tactician, Lawrence wanted to help the Arabs achieve military success. If they did, it would mean that when the war came to an end across Europe, they could form their own government, independent of Turkish rule.

By this time “Lawrence of Arabia” was a well known figure. His work for the Arab people was had earned him a great reputation. That reputation grew in June 1917 when the Arab forces seized the important Red Sea port of Aqaba. The Arabs secured a second major victory with the fall of Damascus in October 1918.

Back in London, Lawrence became a campaigner for Arab Independence. He used his growing fame to create publicity that would aid his cause. After the war, in 1921, the then Colonial Secretary Winston Churchill appointed him as his adviser. However, Lawrence only kept up the post until 1922. Despite their victories and his own campaigning, the Arabs had not won self-rule. Disillusioned by what he perceived as his own failure, he resigned.

Lawrence wanted to escape his own fame now. To this end, he chose to join the Royal Air Force. He also went on to serve in the Tank Corps., this time using the name T. E. Shaw. However, his attempts at avoiding publicity failed.

Lawrence was also an accomplished writer. He wrote the now acclaimed The Seven Pillars of Wisdom, which detailed his life and work. In 1926 a private edition of the work was published for his friends. However, it wasn’t until his death, in a motorcycle accident in May 1935, at the age of just 46, that it was made available to the public.
The Seven Pillars of Wisdom was the inspiration for the 1962 film which ensured ‘Lawrence of Arabia’ would always remain a legendary figure in wartime history.

Could We Have a Shorter School Week?
Advice on Running a Business