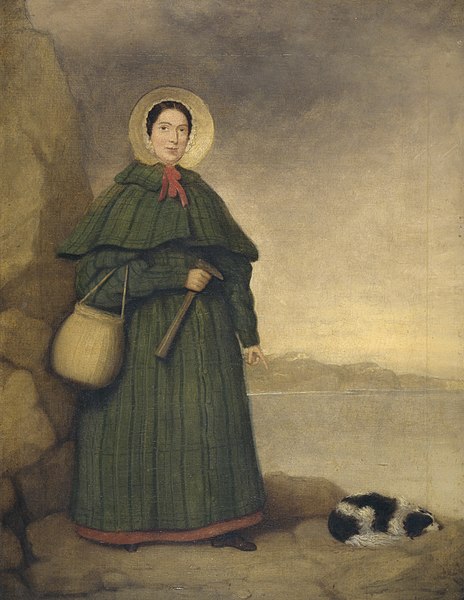 In September, two new species of dinosaur were discovered on the Isle of Wight. Together with the nearby Jurassic Coast – 95 miles of coastline from Devon to Dorset – the island is one of the best areas to find dinosaur fossils in the UK. And one of history’s most important, yet understated, paleontologists also came from the area.

Mary Anning was born in Lyme Regis in 1799. Her family were poor and out of the 9 or 10 children that Mary’s parents had, only Mary and her older brother survived to adulthood. Mary’s father, Richard, was a cabinetmaker and amateur fossil collector and would regularly take Mary along on his fossil hunting trips. He taught his daughter how to clean and care for the fossils they found, and many were sold from his furniture shop. Like most working-class women at the time, Mary had very little formal education, but she could read and taught herself geology and anatomy. It is said that she liked to dissect fish and small animals to better understand the fossils she found.
In 1810, Richard Anning tragically died, and Mary was encouraged to continue collecting fossils, selling them to tourists and collectors, to help pay some of the family’s debts. In 1811, at the age of just 12, Mary and her brother came across an unusual fossilised skull. Intrigued, over several months, Mary painstakingly dug out what was a 5.2m long skeleton. The local people thought that Mary had discovered a monster. Scientists thought it was a crocodile, and the strange skeleton was studied and debated for years. It was eventually named an Ichthyosaur and we now know it to be a marine reptile that lived around 200 million years ago. Mary sold the specimen for £23 (nearly £2000 in today’s money) and it currently resides at the Natural History Museum in London.

Mary Anning Was Not Given The Credit She Deserved

Mary’s ground-breaking discoveries did not stop there though. In 1823, she became the first to discover a complete skeleton of a Plesiosaurus. The specimen was so strange that rumours spread that it was fake and even George Cuvier (a top palaeontologist at the time) originally disputed the find. This attitude to her work was not unusual for Mary and scientists were, for a time, reluctant to recognise her finds as genuine. Even after scientists started to take Mary more seriously and began purchasing fossils from her, they often did not credit her in their writings, despite Mary having discovered, cleaned, and identified them. In 1828, Mary discovered the remains of a Dimorphodon. With its long tail and wings, this was the first Pterosaur ever to be discovered outside of Germany. The Pterosaur is said to be the largest ever flying animal. Mary also pioneered the study of coprolites – fossilised poo.

Mary died of breast cancer at the age of 47 and, despite her incredible discoveries, lived her life in relative financial hardship. Her social status and gender meant that she never received enough due credit during her lifetime, but her legacy is now marked at Lyme Regis Museum where there is a gallery dedicated to her life and work. The museum is also, coincidentally, situated on the site of her birthplace and family home and a blue plaque now commemorates the work of the lady that lived there. Mary’s life and work also inspired the 2020 British film Ammonite, in which Kate Winslet portrays Mary, and there is currently a campaign underway for a statue of Mary to be erected in Lyme Regis.

Which local authorities will need more teachers in the near future?
Want To Go Plastic Free? Here’s How.