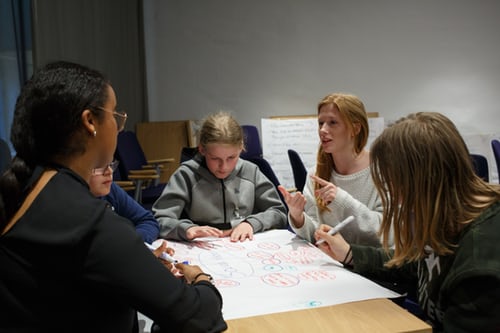 As with so many things in home education, I accidentally fell into running a debate club for local teenagers, rather than it being a planned activity! My 15 year old son and his friend were often debating hot topics, and the friend’s mother and I felt that a formal debate club would really suit them. It turned out to be hugely popular, with up to 14 teenagers all in a room preparing to ‘put across their views’ with gusto!

However, it’s not nearly as scary as it sounds! I have been astonished by the commitment of the kids to the formal debate process, and the respect that they give to each other.
The format that we use is to take a topic (this week it’s “This house believes that video games cause an increase in real-world violence”), and the teens decide which side of the argument they wish to be on. The two teams then have twenty minutes to create a short presentation (up to four minutes), with the side arguing for the proposal going first.

After the two sides have spoken they split again into their teams and work on the rebuttal – the response to the other side’s arguments – and they have another four minutes each for this speech. At the end we take about ten minutes, in a circle format, to have a chaired (by me) discussion about the topic, to see who has changed their mind, who has learnt what and to give them space to consider the topic more deeply. This debrief session is the part that I find the hardest to support, but I’m very clear about ensuring that the kids take it in turns to speak and that anyone wanting to speak must go through the chair. This stops the circle from breaking down into a shouting match and keeps the discussion relevant and topical.

Before the start of the debate we take about fifteen minutes to discuss a skill or learning point that they can incorporate into their talks. Debate club lends itself to myriad different skills. For example:

These skills support the kids’ learning in so many different areas. Evaluating what they read encourages them to recognise the different ways that the same situation can be presented, depending on the writer’s agenda. We just need to look at our newspapers to see how the same news story is presented in different ways to give a totally different perspective. Debate club allows the kids to see that how you present something is often more important than what you’re presenting – and so they become more skilled in recognising the ways that the press, and other forms of communication, can influence us.

Compiling an argument or position is invaluable in so many areas of life. Few people really know how to formulate an argument in a way that means that it will be heard, but debate club shows them that they can use various strategies to make their argument stronger. This doesn’t mean they’re arguing in a negative way! It means that they are communicating more clearly and becoming more influential. This is helpful to them in areas as diverse as a job interview (“So tell me why you’re the right person for this job”) to resolving issues within the family or between friends. When people can better articulate their thoughts and feelings they are more likely to be able to calmly explain their needs. Listening is an integral part of speaking your position – it’s got to be a two-way street, and in debate club the teens are really recognising that their voice, while hugely important, is not the only voice in the room, and that all of the voices are worth listening to.

However, the most exciting part of debate club for me is seeing the way that the young people who come are gaining confidence in speaking in front of others. The respect given to each speaker gives them more confidence to stand up at the front and do their speech. While many of the young people who come to debate club are quite confident, there’s no shortage of very shy, very timid kids, and they have all thrived and grown and flourished in the safe and nurturing environment. I couldn’t recommend running a debate club more highly for those wanting to develop these skills in their teenager. From an accidental start, it’s now the highlight of my week.