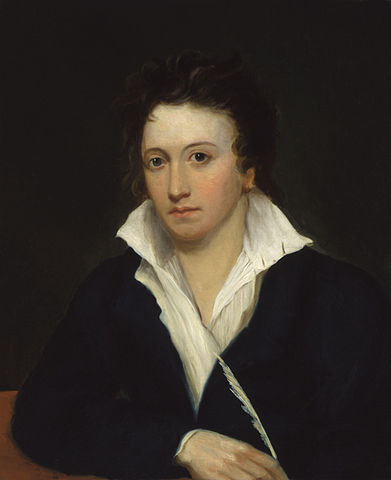 The Death of Shelley

On 8th July 1822, Percy Bysshe Shelley drowned when his boat overturned off the Italian coast. He’d been travelling home from visiting his friends, fellow Romantic poets, Lord Byron and James Leigh Hunt, to his home on the bay of Lerici in the north-west of the country. He was later cremated and his ashes placed in the Protestant Cemetery in Rome. Only 29 years old at the time of his death, Shelley nevertheless made a lasting impact on the world of literature and beyond.

The Poetry Foundation describes Shelley as someone who can be said to “exemplify Romanticism in both its extremes of joyous ecstasy and brooding despair. The major themes are there in Shelley’s dramatic if short life and in his works, enigmatic, inspiring, and lasting: the restlessness and brooding, the rebellion against authority, the interchange with nature, the power of the visionary imagination and of poetry, the pursuit of ideal love, and the untamed spirit ever in search of freedom…”

In contrast to the artistic lifestyle his son would lead, Shelley’s father was a member of parliament. This enabled Percy to receive a good education, which capitalised on his natural intelligence. He spent two years at Syon House Academy from 1802, but was badly bullied, and taunted with the names “Mad Shelley” and “Shelley the atheist”. He was therefore relieved to move on to Eton College in 1804, at only 12 years of age. Having developed interests in science-electricity, astronomy, chemistry, philosophy and literature, largely thanks to his friendship with Dr. James Lind, (physician to the royal household), Shelley read widely.

It was while at Eton that Shelley began to write both poetry and prose. His first publication, Original Poetry, printed by Victor and Cazire, was released in 1810, as was his first novel, a work of Gothic fiction called Zastrozzi. The Poetry Foundation also comments on this: “It is noteworthy that Shelley put his heretical and atheistic opinions into the mouth of the villain Zastrozzi, thereby airing those dangerous opinions without having them ascribed to him as the author or narrator.”

When Shelley moved from Eton to Oxford University, he embarked on three different publishing projects; Gothic fiction, poetry, and a pamphlet entitled, The Necessity of Atheism. This latter work, and his radical anti-church beliefs, saw his time at Oxford cut short, as he was expelled for supporting atheism. His family were increasingly unimpressed with his views and behaviour, and relations were to become strained.

At the age of 19, Shelley eloped to Scotland with 16 year old Harriet Westbrook. Their marriage caused a scandal which alienated Shelly further from his family. It was while he was with Harriet that he published his first serious work, Queen Mab. The couple separated two years and two children later. Then, in 1814, Shelley met 16 year old Mary Wollstonecraft, with whom he was to travel Europe until his untimely death. It was while they were at Lake Geneva in 1816, with Lord Byron, that Mary developed the idea for her novel Frankenstein. The couple married in 1816. Soon after this, Harriet drowned herself.

Two more years later, Shelley moved his family to Italy, where they lived an itinerant life, travelling from city to city. Despite the death of two of their children, and Mary having a nervous breakdown, this proved to be the most productive period of Shelley’s life.

Between 1819 and his death in 1822, Shelley wrote his best poems; those which truly marked him out as a poet of the Romantic age, including Ode to the West Wind, Ozymandias, Music, To a Skylark, The Mask of Anarchy and Alastor, Adonais, The Triumph of Life, and The Revolt of Islam. He also wrote visionary poetry dramas, including Prometheus Unbound and The Cenci.

Shelley did not just contribute to the world of literature. He also remained passionate about social justice, equality for the lower classes and animal rights. It was his idealism and fierce belief in the need for change, and his inquisitive questioning of both science and religion, that bought him the respect of many of his contemporaries, including members of the Pre-Raphaelite group such as Alfred Lord Tennyson, Lord Byron and Robert Browning,

In his short but thoroughly lived, daring and often socially unacceptable life, Percy Shelly produced a vast quantity of work. He remains a much loved poet and a source of inspiration in the modern world. Gandhi, for example, inspired by the non-violent nature of Shelley’s’ passion for change, used quotes from Masque of Anarchy in his speeches and literature. He is also known to have influenced the work of such diverse characters as Karl Marx, Thomas Hardy and Henry David Thoreau.