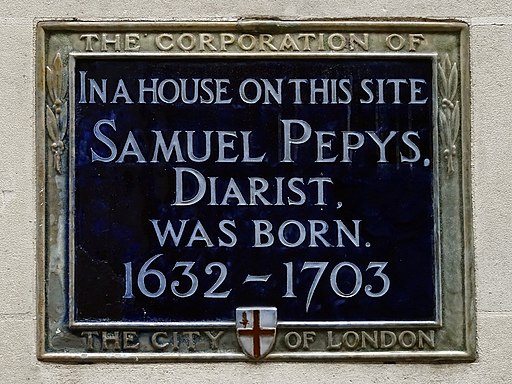 The Diary of Samuel Pepys

Who Was Samuel Pepys?

Samuel Pepys (pronounced ‘Peeps’) was a British public servant, naval admiral and later MP, who was born to tailor John Pepys and his wife Margaret, on Fleet Street, London in February 1633. In 1642, when Samuel was nine years-old, the English Civil War Broke out, leading to the execution of King Charles I in 1649. Samuel lived through some of the most drastic changes in the British political landscape, from monarchy to revolution to military coup right back to monarchy again, which is perhaps why he was such an avid observer of administrative affairs.

After obtaining his degree from Cambridge University in 1654, he returned to London to work as a secretary for his father’s cousin, Edward Montagu, who was Councillor of the State at the time. His relationship with Montagu helped him secure his first civil service job as the clerk of George Downing in 1656. As a well-connected Londoner in his 20s, Samuel had a front row seat to many of the tumultuous political events of the mid 17th century. He started keeping a diary on New Years’ day in 1660 and wrote detailed entries almost daily for nine years. The diary contains a mixture of personal and political observations, described with a frankness that was especially unique for biographies of the period.

Following Pepys’ death the diary was inherited by his nephew, who left instructions (per his uncle’s request) to send them to Magdalene College upon his own demise. It was there that the diary was discovered, rewritten and excerpts published for the first time in 1825.

Much of the value in Samuel’s diary comes from the fact that he survived and chronicled two of the most devastating events in London’s history; the bubonic plague in 1665 and the Great Fire of London in 1666. His diary is the reason historians know so much about the two events; the fire wiped out over 13,000 buildings alongside any important documents they might’ve contained. Other momentous events described in his diary include the coronation of King Charles II and the Second Dutch War.

The more mundane accounts in the diary are just as crucial to historians’ understanding of what is now dubbed the English Restoration period. Very few people at the time could read or write and newsletters and other official documents were only concerned with events relevant to the gentry, meaning Samuel’s recorded interactions with both noblemen and laypeople alike are amongst few records that serve as an authentic representation of 17th century society. It is this ability to cast a broader eye over his society that has made his diary entries so valuable.