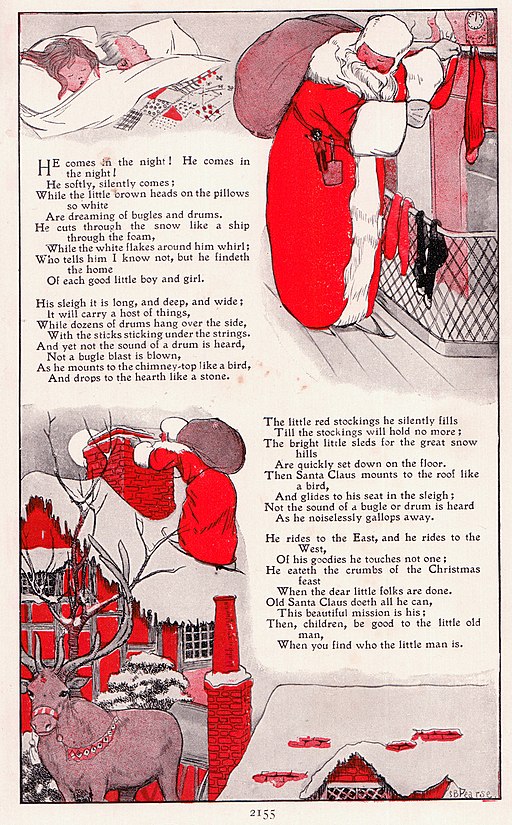 The Magical Story Behind The Real Father Christmas

With Christmas just over a week away, there are constant reminders all around us of Father Christmas – that jolly man with a white beard adorns everything from Christmas tree decorations to boxes of chocolates.

For many, Father Christmas – or Saint Nicholas – epitomises the magic and wonder of Christmas time, with the figure inspiring everything from Clement Clarke Moore’s poem ‘A Visit From St Nicholas’ (‘’Twas the night before Christmas’) to some of Hollywood’s most famous Christmas movies such as Miracle on 34th Street. But did you know that the original Saint Nicholas lived a life almost as wonderous as his namesake?

The Life of Saint Nicholas

Saint Nicholas of Myra was born in Greece in around 280AD. After becoming Bishop of Myra, he became famed for his piety. As a defender of the church doctrine during the Great Persecution of 303, Saint Nicholas was imprisoned before finally being emancipated under the rulership of the Roman Emperor Constantine many years later. The latter of whom ended Christian persecution in 1313, with the Edict of Milan, a proclamation that decreed religious toleration in the Roman Empire.

The Story of a Saint

One of the reasons we associate Saint Nicholas with children and gift-giving today is because he became known as a patron and protector of children. According to Gerry Bowler’s Santa Claus: A Biography, he rescued three young girls from a devastating life of prostitution after he delivered three bags of gold to their impoverished father, providing them with their dowry.

Another legend surrounding Saint Nicholas is that he resurrected three young boys who an innkeeper had murdered. This incredible story was told repeatedly throughout the Middle Ages and cemented Saint Nicholas’ reputation as a protector of children and a miraculous figure.

The name Santa Claus derives from Saint Nicholas’ Dutch nickname Sinterklaas. It was with writer Washington Irving’s 1809 book Knickerbocker’s History of New York that Saint Nicholas began to come to life as the lovable figure we know him as today. Irving described Saint Nick as soaring through the sky in a flying wagon, delivering presents to the good girls and boys. However, Clement Clarke Moore’s 1822 poem, ‘A Visit From St. Nicholas’ – also known as ‘‘Twas the night before Christmas’ – went much further than this by inventing Santa’s eight-reindeer: Dasher, Dancer, Prancer, Vixen, Comet, Cupid, Donder and Blitzen. In the celebrated poem, Moore describes Father Christmas as tumbling down the chimney, with twinkling eyes and a beard as ‘white as the snow’ – images that have come to be closely associated with the Father Christmas we know and love today.

Yet Saint Nicholas’ magic was only brought to life visually when he was drawn, decked out in his familiar red and white suit, by political cartoonist Thomas Nash. And the rest, as they say, was history.

A Christmas Carol: Dickens’ Political Message
There’s More To Your Christmas Stocking Than Chocolate And Oranges