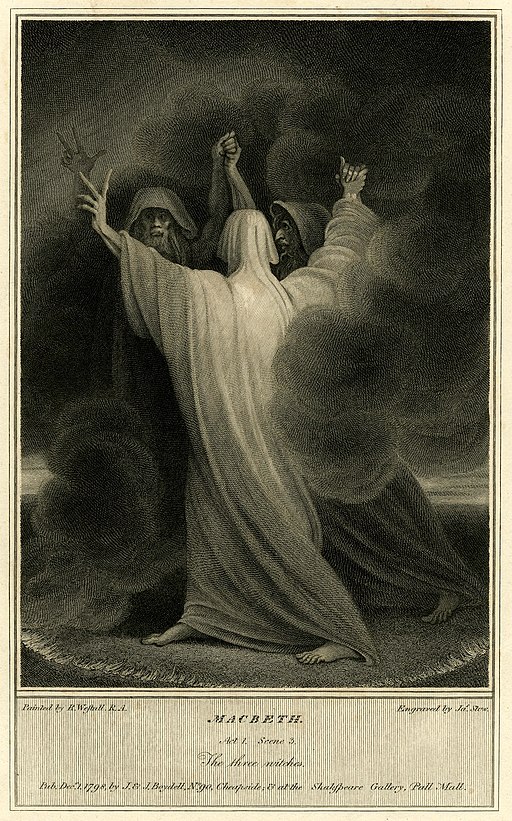 The Real Life Witchcraft of Macbeth

England 1603: A paranoid Scottish King comes to the English throne. Believing a coven of witches were trying to kill him, he develops an obsession with Witchcraft, leading to the killing of thousands by fire, noose and torture. He also has a taste for theatre and becomes the patron of Shakespeare’s acting company, raising their status to ‘The King’s Men”. In 1606 Shakespeare writes Macbeth, a play about a paranoid Scottish King, haunted by three witches. Oh and the protagonist’s best friend, Banquo, is actually an ancestor of the real life King. Coincidence? Or a shrewd move by Shakespeare to curry favour with the new King?

The Bloody Facts Of A Fiction

Between 1484 and 1750 Europe was gripped in a grim thrall to witch hunts. Europe dripped with the blood of 200,000 people, each hunted down and accused of dealing with the devil.

From 1567 James sat astride the Scottish throne, with his rule one of slaughter regarding the treatment of “witches”. In Scotland alone, 4000 met their death on James’ watch. Then, in 1603, following the death of Elizabeth I, he became King not just of Scotland but also of England. He brought his obsession about witchcraft with him. An obsession that would influence the writing of Macbeth…

Where Did James’ Witchcraft Paranoia Stem From?

In 1589, the new King was almost drowned in a storm at sea, which he believed had been raised by witches. The ‘perpetrators’, a group of half a dozen innocent women, were rounded up and subjected to what would become known as The Berwick Witch Trials. James himself presided over events, including the horrific torture of the women. Finally, convinced they were guilty, he had them put to death.

King James also penned the ultimate Witch Hunter’s guide, ‘Demonologie’. Published in 1597, the book inspired the hunting and killing of many innocent souls. But James was not alone in his beliefs. The existence of witches was considered fact by a population who believed zealously in good and evil. It didn’t take much to tip the country into full witch frenzy.

Interesting then that Shakespeare’s ‘Scottish play’ contained three witches. But what similarities do the Bard’s ‘Weird Sisters’ share with 16th and 17th Century thinking about Witchcraft?

The Witches of Macbeth

Witches were believed to be old women, hag like and unearthly in their appearance. Banquo’s description echoes this:

Banquo: What are these
So withered and so wild in their attire,
That look not like the inhabitants o’ the earth,
And yet are on’t?

Witches had familiars, usually a cat or toad, just like ‘Gray Malkin’ and ‘Paddock’ in the play:

One of the Witches describes a punishment she intends to inflict on a sailor by conjuring a storm at sea. A nod perhaps to James’ own experience?

First Witch: Though his bark cannot be lost,
Yet it shall be tempest-tost

Witches were cruel and killed animals:

‘First Witch: Where hast thou been, sister?

They had power over the elements:

First Witch: I myself have all the other,
And the very ports they blow,

Foul things went into their cauldrons:

‘First Witch: Round about the cauldron go;
In the poison’d entrails throw.
(…) Adder’s fork and blind-worm’s sting,
Lizard’s leg and owlet’s wing,

Witches cast magic, as is evidenced by ‘Hecate’, the chief Witch:

Hecate: Your vessels and your spells provide,
Your charms and every thing beside

As if that wasn’t bad enough, they were also in league with spirits:

Hecate: And that distill’d by magic sleights
Shall raise such artificial sprites’
(…) Hark! I am call’d; my little spirit, see,
Sits in a foggy cloud, and stays for me.

Witches could prophesise the future. This of course forms the crux of their interactions with Macbeth:

To an audience, with an absolute belief in witches, and a monarch who had ‘written the book’ on the subject, imagine the terror and wonder at a play that opens with three characters who directly mirror their own thinking about witches.

For further information, you can research at the following sources:

A Little Half Term Reading
The Importance Of Sub-genres

Fay has taught extensively within arts education for 15 years. She specialises in English and drama, with an emphasis on Shakespeare. Having trained as an actor at The Royal Central School of Speech and Drama, she worked for many years as a theatre actor, spending a lot of time performing Shakespeare's plays. Alongside this she established a career as a freelance theatre practitioner working with primary, secondary and SEN schools on a varied program of drama projects. She has worked within the GCSE Drama and English curriculum as well as A level English and Theatre Studies. She has also developed programs of work utilising drama as a way of enlivening other curriculum subjects. Fay has spent several years working closely with Shakespeare's Globe Theatre, where she devised and delivered work to engage students with Shakespeare's language in an active way. She is also a freelance content writer.