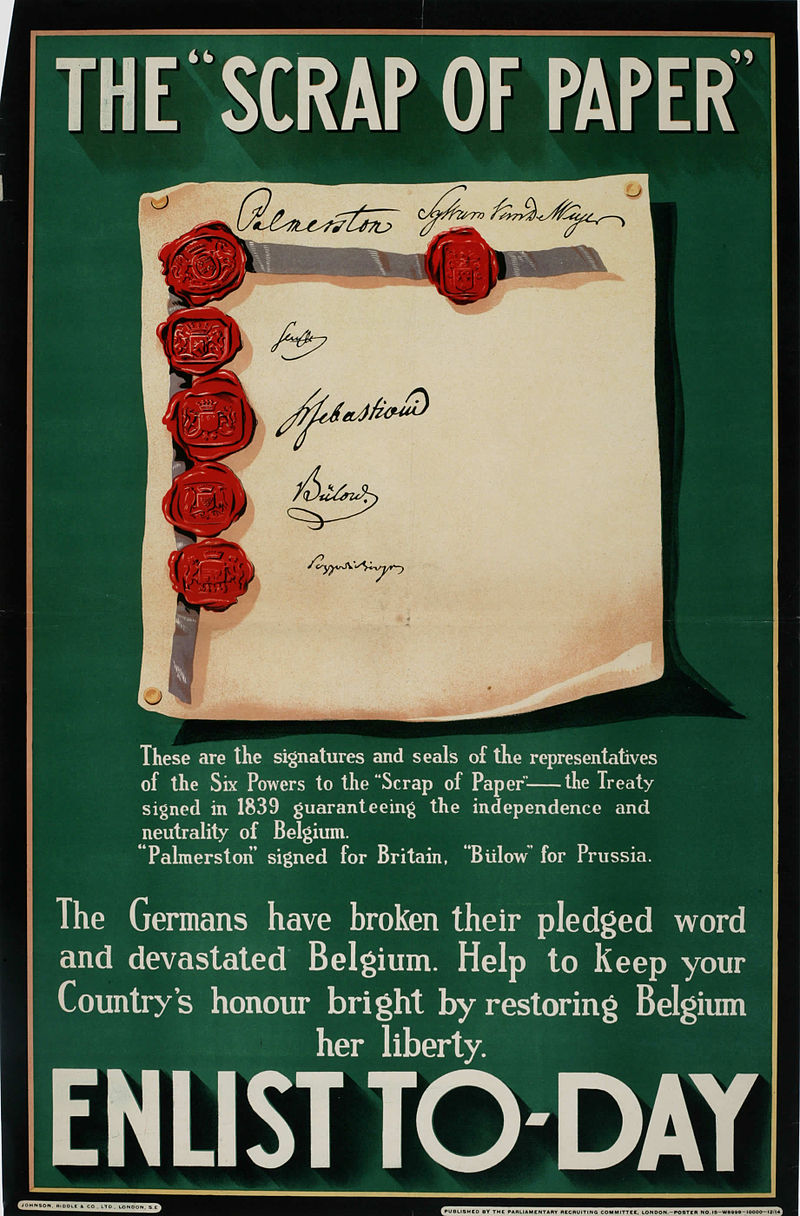 The Scrap Of Paper That Led The Way To War

“Just for a scrap of paper, Great Britain was going to make war on a kindred nation who desired nothing better than to be friends with her.” – Sir Edward Goschen, British Ambassador to Berlin, Germany, 1908 – 1914.

When you learn about the causes of World War One in school, you’ll likely be taught the long-term reasons first. We know that Britain and Germany had been rivals since the 1800s, and that there remained a tension between the two nations. They were in a state of constant competition over who would have the biggest navy and the richest empire. But what was this “scrap of paper” that the Ambassador spoke about and how did this lead to Britain’s declaration of war on 4th August 1914?

The Treaty of London

This “scrap of paper” that the British Ambassador spoke of wasn’t really a scrap at all. It was the Treaty of London, a document signed in 1839 by the leading nations of Europe, including Britain and Germany. You don’t need to know the ins and outs of why this treaty came into existence, but you do need to know that it guaranteed Belgium’s neutrality in any future conflict in Europe. It was like an insurance policy which protected Belgium from invasion or threat.

By August 1914, the Treaty of London was a very distant memory. Germany had allied herself with Austria-Hungary and declared war on Russia, which brought France into the impending conflict. The Germans weren’t too worried about what might happen next: they had a plan – the Schlieffen Plan – which would help them quickly defeat France and then turn their attention to Russia, a much larger adversary on their Eastern border.
The problem with the Schlieffen Plan was that to get to France, Germany would need to pass through Belgium. So, on 2nd August, that’s exactly what happened.

Germany asked Belgium up front for permission to pass through their country as part of her wider plan to defeat France. As you might expect, Belgium refused, but the Germans wouldn’t back down. The very next day, they invaded.

It’s clear that the Germans weren’t thinking about the Treaty of London, or perhaps simply didn’t care about honouring a promise made to Belgium back in 1839. Britain, however, had a quite different reaction. She watched the whole crisis from across the Channel, eyes fixed on the small Benelux nation, unimpressed. Asquith, the British Prime Minister, reacted to Germany’s invasion with an ultimatum: Get out of Belgium by midnight or face the consequences.

Of course, Germany had no intention of leaving Belgium, and so the ultimatum expired. By the next morning, Britain and Germany were at war, a state which would continue for four long years. The scrap of paper that had been thought such an important barrier had been ripped up, thrown in the bin and by many, forgotten. Those consequences would never be.