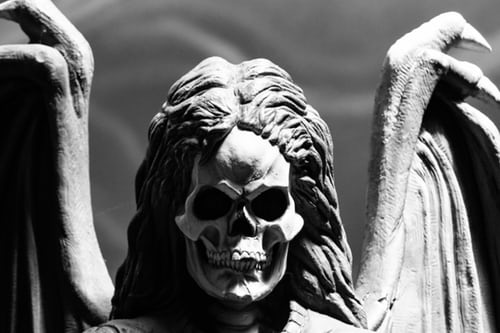 The Witchcraft of Shakespeare’s Time, and Why Macbeth Really Didn’t Help

It’s fair to say that we’ve come a long way since Shakespeare’s time, understanding the true causes of crop failure, mental illness and adverse weather. Thanks, Science! 400 years ago, though, it seemed reasonable – and easy – to attribute these natural misfortunes to the malice of isolated, vulnerable women.

Yes, ‘witches’ were believed to be in league with the devil, carrying out all his malevolent desires. The prospect of a witch in the community would have made your blood run cold. They could fly, disappear, and change into animals. They could predict the future, send people insane, and had voracious sexual appetites. All the fears of 16th century folk could be conveniently embodied by little old Maggie next door, and when it came to fear, nobody was more petrified than one king in particular.

King James I of England (aka James VI of Scotland) was convinced that one perceived coven of witches had, at some point, summoned a storm to drown him. He even had them tried for it. Thereafter this issue of the occult became became an obsession for him. He proceeded to write a full book about witchcraft, called Daemonologie, and passed a parliamentary act to make it punishable by death.

With King James’ new laws, people devised cruel and illogical systems to test the innocence of suspects, such as tying the accused’s thumbs to their toes behind their backs and throwing them into water. If they sank, the now-deceased person was found innocent – Hurrah! If they floated, they were considered guilty and were then killed by hanging -Double hurrah!

Because it was so easy to cry ‘witch’, people tended to abuse the system further, such as by bumping off land-owners to gain their coveted patches. Unlucky women whose babies were stillborn were also often accused of witchcraft, and others who bore the ‘evil eye’ (a mole, a freckle, a wart…) were in danger too. In fact, with the royal criminalisation of witchcraft in 1604 (and before its 1736 retraction), hundreds of thousands of people in Europe were tortured, hung, and drowned.

Playing to the Crowd

Enter Shakespeare, stage left. Ooh – does he instigate a petition to end this cruel practice? Write a sonnet to commemorate the tortured? Make soup for the orphans whose mothers have been killed as witches? No. He exploits it at its peak, in fact. A talented writer, creative director, and canny businessman, Shakespeare targets the king’s biggest weakness. In 1606, Macbeth is born, capitalising on the monarch’s supernatural preoccupation.

The curtain lifts. Three witches dance, chant and plot, demonstrating to the witch-hating king that this Wills fella really has his finger on the button. And how does Shakespeare, much like the tabloid press, ensure his audience is gripped by terror? Well, famously, three witches chant in trochaic meter, the rhythm of their words in creepy, backwards opposition to the iambic meter of all the other characters: the foregrounded stress of their lines is trance-like, angry and foreboding. Being in a three reinforces the characters’ devilishness: they comprise an unholy trinity in direct contrast to the Father, the Son and the Holy Spirit of James’ religious devotion. Finally, just to make sure the king is whipped into a fervour, the witches rant and rave about using a storm to torture a near-drowned sailor. Hmm, sound familiar?

Shakespeare is not just a gifted playwright: he also knows his target market and will stop at nothing to reach it. Fair is foul and foul is fair, indeed!

What do we mean by an Unreliable Narrator?
Scientifically Proven Revision Tips