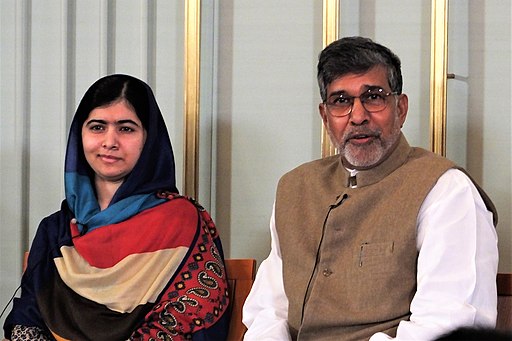 This article follows on from that published on the history of the Nobel Prizes, which can be found by following the link here.

According to the Last Will and Testament of Alfred Nobel, the Peace Prize is awarded to the person or persons who, in the preceding year, “shall have done the most or the best worker the fraternity between nations, for the abolition or reduction of standing armies and for the holding and promotion of peace congress”. Life and history has changed since the time that Nobel produced this Will, so it is understandable that the Foundation upon which it is based has had to make judgements about how to interpret the spirit of this in today’s world.

In 2014 the Nobel Peace Prize was awarded to Kailash Satyarthi and Malala Yousafzai “for their struggle against the suppression of children and young people and for the right for all children to education”, aspects of which can be seen to fall under the concept of the ‘promotion of peace congress’.

At 17 years old, Malala is the youngest Nobel Peace Prize Winner. In fact she is the youngest of any Nobel Prize to date. She became a household name as much for her stance against the subjugation of young women and their being refused an education in her home country of Pakistan, and anywhere else in the world, as for the assassination attempt on her life for these very values.

Kailash is possibly a less well-known name but in no way is he lesser in his approach to the subject of children’s right to education and freedom. Born in the Vidisha district of Madhya Pradesh in India, Kailash has been a proponent of reading and education as a means to propel oneself from poverty for the majority of his life. At the age of 11 he set up local stalls of discarded books to encourage and enable all the children of his neighbourhood to have access and to interact with the written word in as much depth as they liked, rather than as determined by their financial status.

After completing an electrical engineering degree Kailash worked as a teacher. Then, in 1980, he founded Bachpan Bachao Andolan, an organisation which follows the example of Mahatma Gandhi, and the concept of the ‘peaceful struggle’, whilst focused on the rights of the child. In recent years he has contributed to numerous conventions on child labour, children’s rights and the universal right to education. He continues to advocate on their behalf in his home country of India, as well as internationally.

What a Nobel Peace Prize Can Bring

The winners of the different prizes receive an amount of money that is determined by the Foundation. The entire prize is usually in the region of $1 million USD. In numerous years the prizes have had multiple winners, as was the case for Malala and Kailash. How the money is spent is not stipulated by Nobel or the Foundation and will depend on the circumstances of the recipient, their stage in life, their aspirations, and their needs. Many Nobel recipients donate their prize money to the causes or research they believe in. Many also ensure they have a greater level of financial stability, which in turn can then support them in pursuing the very subjects they were awarded for.

Whilst there is no apparent trend in how Nobel Prize laureates spend their money, there is a trend that shows that, whatever path they have chosen, they continue to contribute to it in a dedicated way. It could well be due to such laser focus, alongside their momentous initial accomplishments, that they are awarded their prizes in the first place.

The Nobel Prize Foundation
The Changing Face of Home Education